I continue the topic of becoming a Thought Leader…

Several areas that you may get involved in, when viewed properly, combine into a mixture that can place you at the top of your field and garners the respect of outsiders. These areas include speaking, writing, industry volunteerism, conference attendance, and having a web presence. 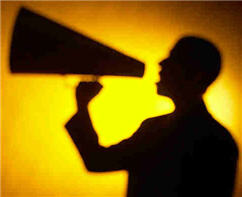 Having a voice in an industry requires a certain amount of speaking at events and meetings so that your voice can rise above the din of conversations that swirl around any given issue. Getting to a point of being invited to speak is a long and hard road. You have to prove yourself in many different arenas. It takes years of building, one engagement at a time, until you are sought out for these roles.

Speaking starts by just adding your voice to the others at any event that offers this kind of interaction.  If you are at a user group, start by asking some questions.   After a while start answering some that are tossed out to the group.  If you don’t have this opportunity then talk to people after the event. Talk to the speaker.  Get to know the leaders.  Just start small and work up from there.

Most users start by talking about how to use the software.  This is a chance to share technical expertise.  Learn all you can and then share it.

I have been speaking to the issues surrounding technology use and CAD for over 15 years in small and large venues. These events thrust me into the spotlight and allow me to bolster my firm’s reputation and my own. It is a balance of paid and unpaid speaking that I do. When paid, the rate is very modest and usually does not adequately cover the time and effort I put into developing and preparing the topic.  You are not going to get rich by doing these things.  When the events are unpaid, then the fee for the event is usually waived and I can go for free. I am a recurring faculty member of Autodesk University, which is paid, and at most two other events during the year, which are most likely not paid.