Much hoopla always surrounds the release of new software from Autodesk.  It is touted as having new features, new functions, new fixes and more.  With the new software comes greater focus on Autodesk products.  As such, the stock price advances.

I wanted to compare the most highly spoken of stock in recent months to Autodesk (ADSK – their stock symbol) and that would be Apple (AAPL).  As I write this Apple edged over $600 per share again and ADSK is a little over $42.  That would tell that tale that most people look at.  Apple is more valuable than Autodesk.  I won’t fight that fight, but… 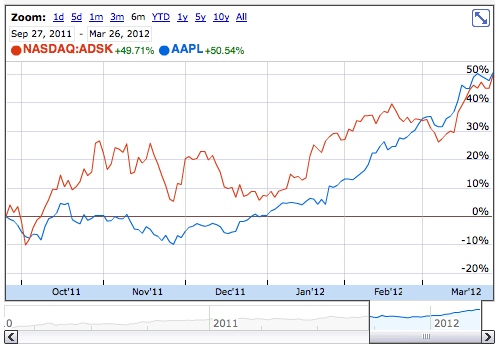 Stocks are funny things and the fickle nature of the market can drain away advances faster than you can say Tech Bubble, but the point of this post is to encourage you to see that the stock market rewards good companies.  Sure there are momentum stocks that rise faster because everyone is piling on, but the best companies usually sustain stock growth.  The best companies usually have superior products.

I recall a conversation I had in passing with Buzz Kross (Senior Vice President, Manufacturing Division at Autodesk) at AU 2011 in early December of 2011.  The stock price was just under $30 per share and he made a comment that “it’s a $40 stock”.  He was right and today it is breaking thru $40 and may be on the rise to a new 52 week high.