When you have attached a PDF Underlay you can access it again in many ways.

You can underlay the following file types:

DWF – A DWF (Design Web Format) file is a highly compressed file format that is created from a DWG file.
DWFx – DWFx, the future of DWF, is based on the XML Paper Specification (XPS) format from Microsoft.
PDF – Adobe System’s document exchange format.
DGN – Bentley System’s Microstation format. DGN support is limited to V7/V8 DGN files and 2D objects. The 2D objects are imported or attached with full (X, Y, Z) coordinate information, as was present in the original file. If the file contains 3D solids, surfaces, or other 3D objects, a warning is displayed. This content is not supported in this file.

So if you do use Underlay – what options are there?

First off – OSNAPS work.  You can snap to graphic elements in an Underlay.  You cannot however use the  Measure command.  You can dimension from point to point though 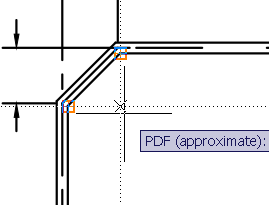 You can reattach an underlay multiple times, treating them as a block. Each underlay has its own clip boundary and settings for contrast, fade, and monochrome.

Warning: You cannot bind an underlay to a drawing and you cannot edit or modify the underlay’s content.

DWG file references (xrefs), in a drawing can include an underlay. In this situation, objects in the underlay are visible in the parent DWG file.

All of the property settings made to the underlay in the external reference, such as clipping boundaries, appear as they do in the parent drawing.

If a file you want to attach as an underlay is password protected, you are prompted to enter the password after you have selected the file. You cannot attach the file until you have correctly entered the password.

This can get annoying…

If you change the path of an underlay to a file that requires a password, you are prompted for a password as well.

Or better yet – don’t use passwords.

I wonder why the osnap will not work while using DWF underlay in AutoCAD 2010. DWF file was scaled when attach to a dwg file.